Hello and welcome dear friends to my site again. Today I was reading a women’s magazine and I saw a contest open for ladies which was to make something out of two very dissimilar ingredients, chicken, and beaten rice or poha. I started thinking and after a while, I finally decided to combine both of the ingredients to come up with a flavorful, wholesome and tasty treat of Poha Biryani or Chicken Poha. I decided to make it and judge it myself and then I sent the recipe to the contest. The dish is quite creative and tastes good too. So, whether or not I win the competition, I decided to share it with you all, as I want to share every creative, unique and new recipe with you all. So let’s start with its making—

Wash the chicken. Chop the onions, green chilies, and cilantro. Take a kadhai and add some vegetable oil into it. Next, splutter in some cumin. When it crackles, add the chopped onions and fry till half-browned. Then add ginger-garlic paste and fry again. Next add the red chilly powder, coriander powder, cumin powder, chicken masala,garam masala and tomato puree and fry for five minutes. 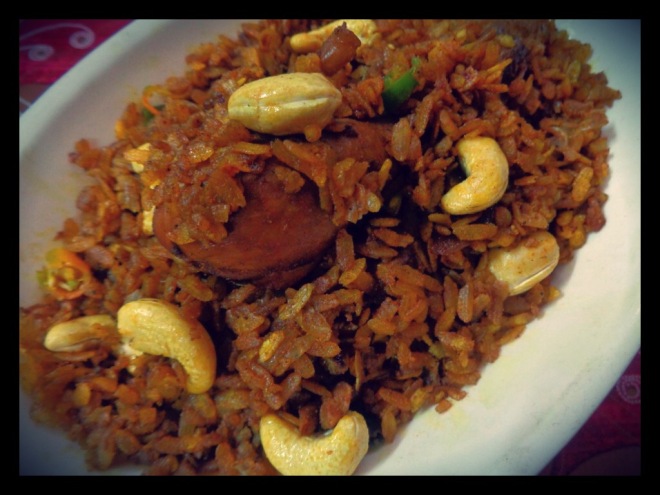 When the masalas get fried and start leaving the edges, add enough water to let the chicken get cooked. Cover and simmer on a low flame.When the chicken is sauteed and gravy has thickened add the beaten rice and dry fruits and fry for two minutes. You can sprinkle some water over the poha so that it does not start sticking to the edges. Fry well. Garnish it with cilantro but it is purely optional.

Our Chicken Poha is done. Serve it in the main course along with curd and salads of your choice.

Hello and welcome back dear buddies. It’s the season of mangoes and we make various wonderful dishes out of either the raw or ripe versions of it. I like both of them and really get excited about how many new recipes I could prepare with them, with the onset of summers. Today I’ll be sharing a great recipe of raw mangoes in jaggery sauce which is sweet, flavorful, delighting and really fun to prepare too. So let’s start with the making-

Wash, peel and cut the mangoes in medium-sized cubes.

Lastly, let the pickle cool and then mix in the vinegar and raisins.

Our Raw Mango Pickle In Jaggery Sauce is done. Serve it with hot phulkas, pooris, paranthas or with anything you want.

Hello dear buddies.Welcome back. Today I’ll be sharing with you a very simple and tastier version of the brinjal and tomato mash which is a common dish made everywhere in India and here I have added one extra ingredient in it, potato. The mash is simple to make, tasty and has very little calories. It’s a wonderful dish when you are super busy. So let’s start with the making—

Wash all the veggies mentioned above. Make slits in brinjal and tomato. Roast the brinjal, tomato in an oven or on a gas flame and boil the potatoes. Finely chop the onions, green chilies and cilantro.

Take a pan, add vegetable oil and splutter some cumin in it. Now add in the chopped onions and green chilies and half fry them. Next add the salt, red chilly powder,garam masala, dry mango powder and then add in the mashed brinjal, tomato, and potatoes. Give everything a good mix and switch the gas off. Garnish with chopped cilantro. 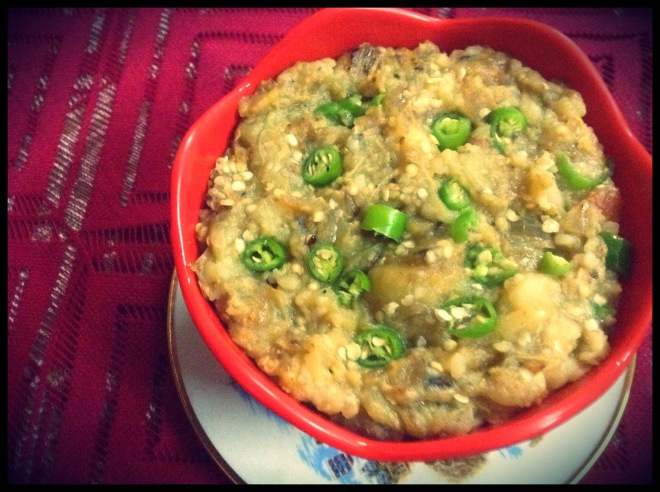 Our Brinjal, Potato and Tomato Mash is done. Serve it with anything that you want. 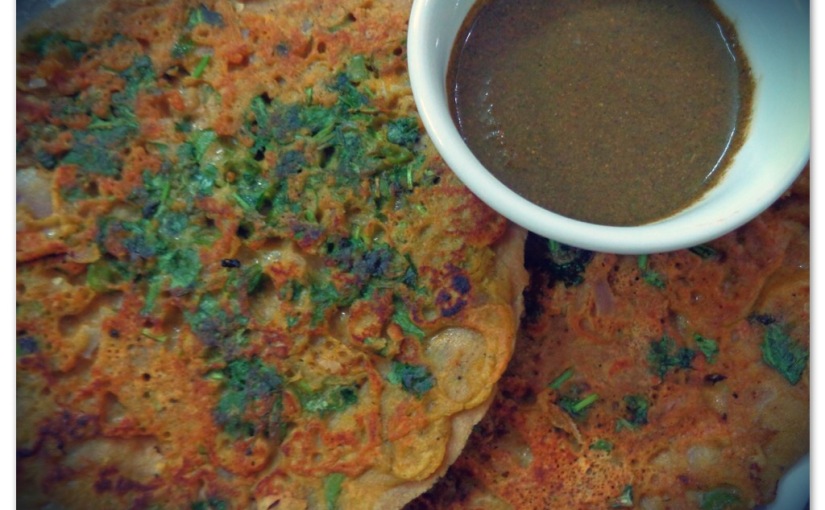 Hello dear buddies. How are you all? Today I’ll be posting a breakfast or brunch recipe idea, which I got from yesterday’s brunch of mine that was gram flour cheelas, some dhoklas, and hot cardamom tea. I had some of the cheela batter left with me and so I cooked up this recipe of Roti Cheelas combining the roti and the cheelas. They turned out great and I thought of sharing it with you guys too. It is a crispy, tasty and super handy recipe which you can make any time. So do try it out guys and let me know. The recipe is as follows:-

For the cheela batter–

To make the wheat flour chapati(Indian flatbread)make a dough from the wheat flour and water and make two or three medium-sized chapatis of it. Chop the onions, green chilies, and cilantro. 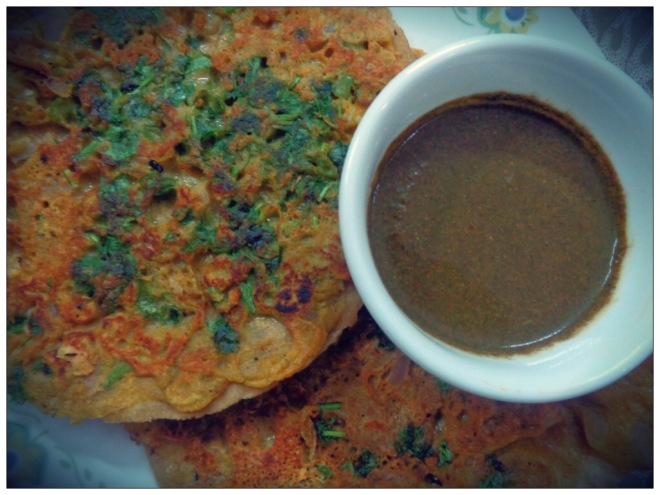 Now to make the roti cheelas, heat a pan and place the chapati on it. Now with a ladle smear, one dollop of the gram flour batter all over the chapati and cook it for two minutes. Then flip it to the other side and fry it adding some oil. The roti cheelas should be crisp, crunchy and well cooked. Make similar roti cheelas with the remaining batter.

Our Roti Cheelas are done. Serve it with curd-mint chutney and sweet buttermilk or chaach. 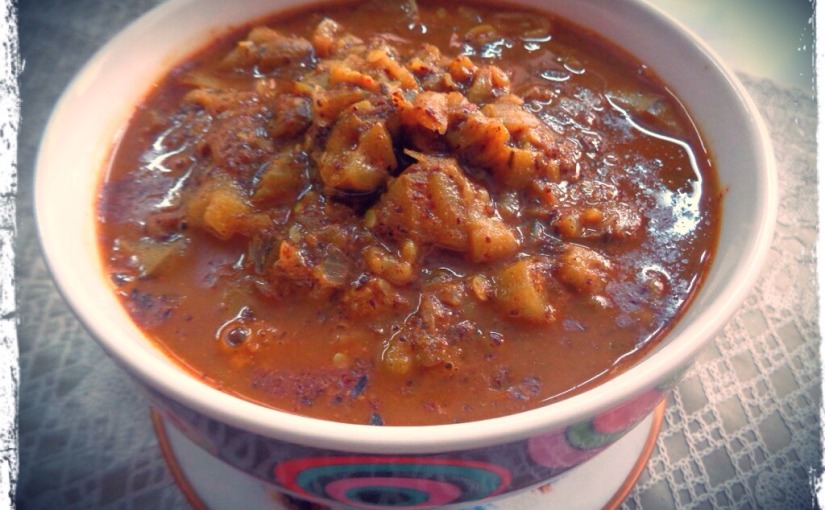 Hi everyone and welcome to my cozy cooking corner again. How are you all? I have been late to post my new creation because was having guests at home and lots of fun and enjoyment though I am now back to my blogosphere and ready to roll. It’s the month of June and it’s pretty hot in here in Delhi and the whole of India. People generally enjoy seasonal fruits and vegetables more, now and we have a perfect variety of them too like mangoes, sponge gourds, ladyfingers, pointed gourds etc. We generally want our preparations to be milder and tastier this time of the year. So I am sharing a recipe of sponge gourd with roasted flax seed powder. I have made similar recipes using flax seed powder and other different vegetables and this one is in line with the others in being tastier, healthier and all green. So let’s start with the dish—-

Wash and scrape the sponge gourd and cut into round pieces. Wash and cut the radish likewise.

Take a pan and add all the tempering ingredients into it. Let it splutter.

Now when the veggies are half cooked add the roasted flax seed powder and dry mango powder and saute the curry till water evaporates. 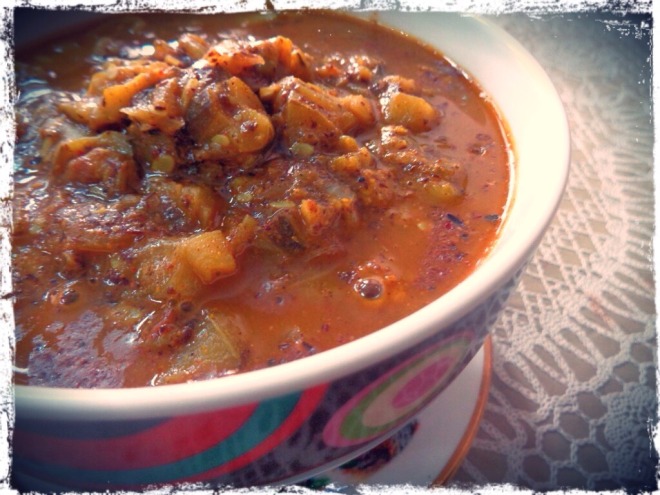 Our Sponge Gourd And Flax Seed Curry is done. Serve it with steamed rice, rasam, garlic chutney and poppadums or friums.

Friends do try the recipe at home. Share your comments and feedback. Have a rocking June weekend. Till then healthy cooking, happy living!!!